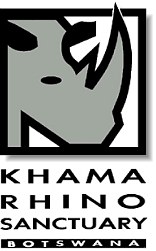 History. In 1989 a group of Serowe residents conceived the idea of a wildlife reserve near Serowe. Serwe Pan, then a cattle post, had been a traditional hunting area teeming with wildlife. The residents wished to re-establish it to its earlier splendour. In 1993 the Ngwato Land Board allocated the land around Serwe Pan to the Khama Rhino Sanctuary Trust.

The site was chosen due to its excellent habitat for the rhinoceros, central location and proximity to a Botswana Defence Force (BDF) base, which provides the Sanctuary with 24hr protection. Covering approximately 8585 hectares of Kalahari sandveld, the Sanctuary is centred around Serwe Pan - a large grass-covered depression with several natural water holes. Serwe Pan provides prime habitat for the white rhinoceros and other grazing animals, whilst the denser vegetation in the southern area of the Sanctuary is favoured by browsing animals such as giraffe and black rhino.

The Sanctuary is a community trust governed by a Board of Trustees who are elected from the local communities of Serowe, Paje and Mabeleapodi. The President of Botswana, Lieutenant General Seretse Khama Ian Khama, Paramount Chief of the Bamangwato, is Patron of the Trust.

The Sanctuary lies 25km north of historic Serowe on the Serowe-Orapa road. Serowe, one of the largest traditional villages in Africa, is the birthplace of Botswana's first President, the late Sir Seretse Khama.

Paje and Mabeleapodi are two small picturesque villages within fifteen kilometres of the Sanctuary.

In February 1993, four rhinos were translocated from northern Botswana. This was accomplished by the Botswana Department of Wildlife and National Parks with the help of the Natal Parks Board. The rhinos were placed in very large bomas which were built by volunteers from the local communities. One of these rhinos had been seriously wounded by poachers bullets just prior to capture and died within a month of translocation. Another rhino died in October 1994 despite the best veterinary care. Another young bull was brought to the Sanctuary bomas in May 1994.

A 28km electric fence, sponsored by Debswana and De Beers, was completed in June 1995. All the rhinos were then released from their bomas to roam free within the Sanctuary. Later that month the North West Parks Board of South Africa donated and translocated five more white rhinoceroses to the Sanctuary.

These were all released from the bomas shortly after their arrival. All the rhino settled well and soon began breeding.

More calves were born in the Sanctuary during 1997, although one has since died due to rough 'horning' by the dominant male. After friction developed between the two mature males it was decided to move the younger one out. He was exchanged for a young female from Kruger National Park in March 1998.

Confidence in the Trust and its achievements have been expressed by the Southern Africa Rhino Specialist Group who are keen to establish Khama Rhino Sanctuary as a breeding centre for the re-population of the white rhino in Botswana. In addition, Botswana's Department of Wildlife and National Parks has also re-affirmed its commitment to re-introducing black rhino into the country and using Khama Rhino Sanctuary for this.

Khama Rhino Sanctuary is run by a community trust and is reliant upon donor funding. It is only through this generous support that we are able to continue our work towards preserving Botswana's unique wildlife heritage.

Khama Rhino Sanctuary lies 25km north of Serowe on the road to Orapa. Covering approximately 4300 hectares of Kalahari sandveld and hardveld, it is centred around Serwe Pan. The Gate is open daily from 7 am until 7 pm.

The Sanctuary maintains roads suitable for self-drive viewing (in 4WD and 2WD bakkies) and also offers guided game drives and nature walks. The chalets and camp sites, which have a braai and hot water, are accessible by most vehicles. Other facilities include the restaurant and pool, a bird hide, a picnic area, a curio and gift shop, sale of basic provisions. The Educational Centre, mostly for school visits is also available for conferences.

Both species of rhino have poor vision but a keen sense of hearing and scent. Both species have two horns; these horns are outgrowths of their skin and are composed of tightly massed filaments similar to hair. The horns are thought to have aphrodisiac properties by people in the Far East, and are used as dagger handles in Yemen. Because the horns are so highly valued by these people, rhinos are being hunted to extinction.

The Sanctuary is open daily from 7 am to 7 pm. Visits outside of these hours may be arranged in advance with the Sanctuary Office. At the Entrance Gate you will find the reception where all fees are paid and you can book camping or chalets. Wood for fires and braais can be bought here, along with ice and some basic provisions. Binoculars are available for hire and the friendly staff can help with information about the flora and fauna of the Sanctuary. Also here is a craft shop selling various local crafts, souvenirs, books, maps and postcards.

Guided game drives and nature walks can be booked at the Entrance Gate. Both take about two hours, during which time you will be guided around the Sanctuary by our well trained and very knowledgeable rangers.

Picnic Site. This provides an excellent place for day-visitors to relax and enjoy the peace of the Sanctuary. Make use of the seating, tables, water and braai stands for your picnic. Wood can be bought at the Entrance Gate.

Malema's Kraal. The site of Malema's cattle post was badly over-grazed by livestock. The bare heaps of kraal manure and lack of grass cover attract lots of worm and other ground dwelling insects making the area an important foraging ground for Swainson's and Crested Francolins, Groundscraper Thrushes and Helmeted Guineafowls. The Candlepod Acacia and Sicklebush growing in the fringes of this area are browsed by Impala, Kudu, Steenbuck and Giraffe.

Malema's Pan. Malema's Pan is named after the owner of the cattle post previously located here who assisted in the establishment of the Sanctuary. The Pan is the site of the main waterhole frequented by most mammals and particularly by the Rhinos which favour the mud wallows in the Pan. The wooden posts are for them to use to rub against and save damage to the trees. Vultures and Sandgrouses also prefer to drink from this pan. Stay here late in the afternoon and you will see many of the Sanctuary's wildlife.

Serwe Pan. Formed by wind erosion thousands of years ago, Serwe Pan is the central point and main focus of the Sanctuary, providing a home and feeding area for the majority of grazing ungulates. Zebra, Springbuck, Wildebeest, Hartebeest and watch the other side of the road and you may see Kudu with their curly horns watching you from the shelter of the bushes. The Setswana meaning of Serwe is "joint of meat" which confirms the stories that wildlife has always been found here although today it is not for eating.

Camelthorn Island. This area is generously covered with Camelthorn trees which are usually the first to come into leaf in spring providing the giraffe with browsing material. The sweet-smelling, pink-tinged flowers appear before the leaves. On over-grazed rangeland they encroach over other trees. A few Whitebacked Vultures nest in some of the trees.

Kgama Drive. Kgama Drive and the shrubs along it mark the boundary between Malema's Pan and Serwe Pan. The two pans once existed as one big pan until sand deposited along this dividing line formed a ridge which has since been colonised by trees and shrubs forming a perfect boundary between the two land features. Camelthorn found along the drive attract Ciralfe to this area. Hartebeest, Wildebeest and Eland can often be seen from this point, frequently followed by Zebra.

Pan's Edge. This marks the transition front the pan to sandveld vegetation. Here the ground is dominated by unpalatable tall sandveld grasses. The trees and shrubs are browsed by the giraffe and kudu. Sandveld birds such as the Kalahari Robin, Burchell's Sandgrouse and Blackchested Prinia are common along Phuduhudu Drive. The small, attractive Steenbok is seen throughout the Sanctuary especially in the long grasses.

Small Pans. This area boasts a series of picturesque pans, anthills and open grassland. The pans fill up with water during the rain season providing wild animals with drinking water and mud wallows. After wallowing, the Rhino rub on the anthills to rid themselves of skin parasites. This explains the rounded nature of the anthills in this area.

Bird Hide. A wonderfully peaceful viewing spot. The traditional reed and thatch hide overlooks one of the small pans where water is retained all year round. Stay a while and quietly watch the many birds and animals which come here.

Restaurant. Relax with a cool drink and an appetizing snack in our bar or at the pool site after your safari! In our restaurant you can enjoy a delicious local or western meal, freshly prepared by our excellent chef.

The camping and chalet facilities are a short drive from the Entrance Gate and are accessible without 4WD.

There are 12 campsites, including sites for large groups. The central feature of each site is a large Mokongwa tree which provides both character and shade. There is also a fireplace, braai stand with grill, and tap with birdbath. The campsites are served by ablution blocks which have male and female shower facilities with hot water.

Our rustic chalets sleep two to six people. Each chalet has a toilet and shower ensuite with hot water, bedding and towels are provided. Situated by a Mokongwa tree, you will also find a fireplace, braai stand with grill and tap with birdbath. Basic cooking equipment and crockery is provided. Wood can be bought at the front gate.

The chalets are popular so it is best to book in advance at the Sanctuary Office. It is not usually necessary to book for camping, but large parties may prefer to check in advance.